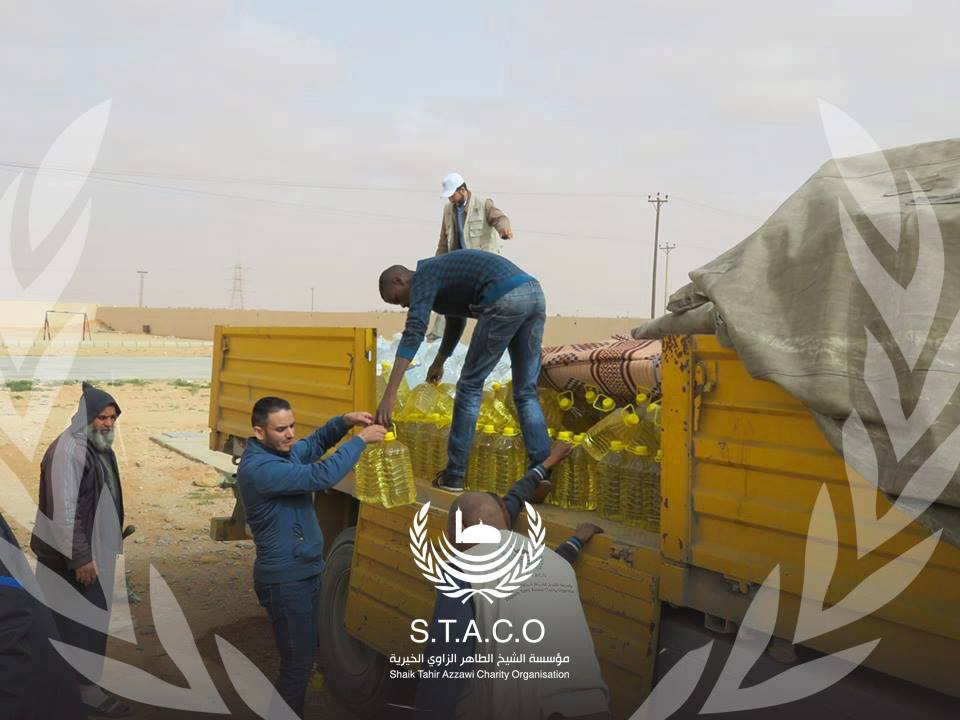 Qararat Al-Qatf – Libya
In light of the difficult conditions experienced by the people of Tawergha, the Sheikh Al-Taher Al-Zawi Charitable Foundation distributed 500 food baskets represented in the necessary supplies to the displaced Tawerghans in the Qararat Al-Qatf area, located 87 km north of Bin Walid, and its road connects the coastal road to the east and south of Tawergha. And that after the faltering return to their area, which was called by the President of the Presidential Council of the Government of National Accord.

This aid aims to alleviate the suffering and difficult conditions experienced by the displaced Tawerghans who reside in tents pending an agreement to implement the decision after armed men prevented the return of the displaced Tawerghans to their city, which was scheduled based on the agreement of representatives of the cities of Misurata and Tawergha, and they closed the gates leading to the city. According to the first assessment, the humanitarian situation of families is bad, especially children and the elderly.

It is noteworthy that the Libyan Government of National Accord announced the date of the return of the people of Tawergha to their city on the first of February, after the agreement between two committees from the city of Tawergha and Misurata last June on the return of the displaced and reparation for the damage, after the displacement of the people of the city more than six years ago following the events of the seventeenth revolution February in 2011.
The Sheikh Al-Taher Al-Zawi Charitable Foundation continues to extend a helping hand until the place for the return of the people of Tawergha is prepared at the time when it is hoped that the Libyan people will leave arms and move towards construction and reconciliation and extend the hand of tolerance with the aim of returning the displaced and displaced on the basis of fraternity and social justice because the homeland is for everyone and by everyone.