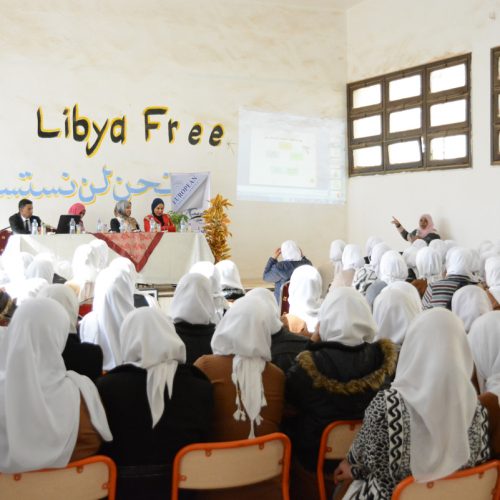 Sebha…Libya
In conjunction with the spread of the use of technology and digital applications and the spread of crimes of a digital nature.
The body of the Sabha office team at the Sheikh Al-Taher Al-Zawi Charitable Foundation

In partnership with the National Gathering in Fezzan, a field awareness campaign under the title:
(Protecting our children from the dangers of social networks)
It includes a set of educational sessions for male and female students in schools for adolescents aged 13-19 years. More than 200 participants participated in the first and second sessions.
A set of axes were presented, including: Coverage of the social aspect by the social worker, A. Fatima Muhammad al-Mahdi and Psychologist, under the supervision of Professor Zainab Misbah Muhammad, in charge of the psychological support office in education, Sebha, and on the digital safety side, the stadium, Hassan Ali Habib, responsible for the psychological support team in the institution, and the legal side, lawyer Saleh Salem Hatita.
This campaign was widely accepted by teachers and psychological and social counselors in the educational institutions that were visited, especially that the target group is a very critical group.