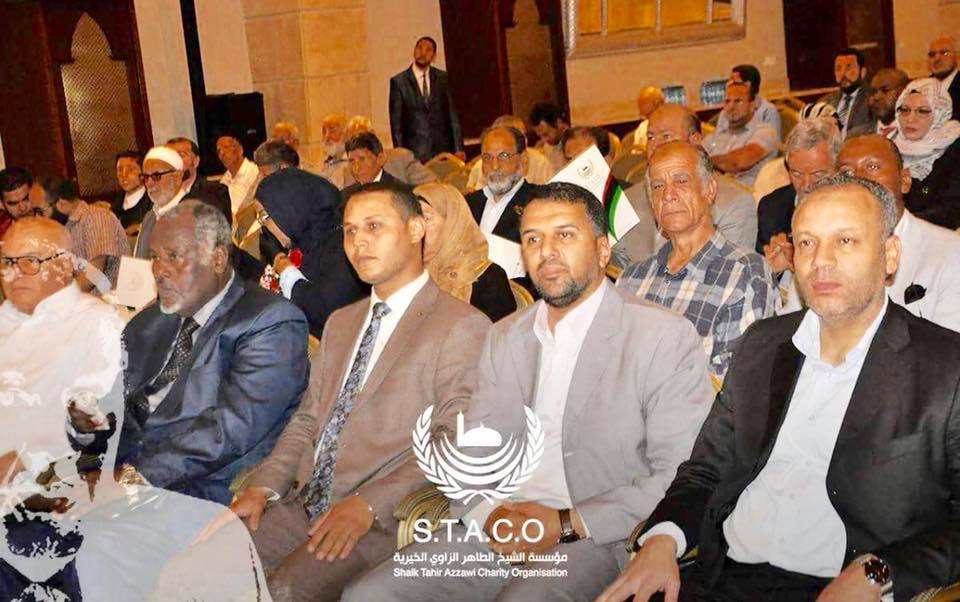 Tripoli, Libya
The Sheikh Al-Taher Al-Zawi Charitable Foundation held the first honorary symposium, in which it chose Prof. Dr. Muhammad Masoud Gibran – head of the Academy of the Arabic Language, author, historian and writer, who enriched the Libyan library during half a century with his many writings and investigations – as a personality for this symposium, under the title: Dr. Muhammed Masoud Gibran. and dated.

The symposium opened with the speech of the Chairman of the Preparatory Committee, Professor Mahmoud Al-Mahdi Al-Ghatmi, through which he expressed that it is an honor to be loyal to the people of knowledge to remind them of what they have made and presented to this country. The pleasure of knowledge in them, exhausting himself in them, and resenting the joys of the world and the adornment of money, he was not tempted by high positions, which he was better able to take over than others, due to his scientific capabilities, but he chose the path of science, and what is the most difficult of the path, because of what it requires of patience, perseverance, and work And perseverance, as he was a knight who does not have dust, and a writer of the greatest writers of contemporary Libya, and we were honored to benefit from his knowledge, and we were affected by his high morals, his great humility, and his attractive calm.

He stated that by communicating with many of his friends and colleagues at home and abroad, and his former students, regarding the symposium, they welcomed and blessed these commendable efforts, and the result was a set of testimonies and research dedicated, to our professor, Dr. Muhammad Masoud Gibran, and he added that “we promise to collect these testimonies and research dedicated A book will be published in the Foundation’s publications later this year, and this is the least we can offer to Professor Dr. Muhammad Masoud Gibran, out of love and loyalty to one of the contemporary flags of Libya.”

This was followed by the speech of the Chairman of the Scientific Committee, Dr. Nurni Ahmed Obaid, in which he blessed the Foundation, which has the year of appreciation and the idea of ​​loyalty, and praised the cultural diversity of Dr. Muhammad Masoud Gibran, and his scientific views, which raised a number of issues and questions, which stimulate research and enlighten the paths of scholars.

He also appreciated the presence of distinguished scholars and writers from outside the country and their bearing the trouble of traveling and their sense of the importance and necessity of cultural communication between sister countries.

Then the speech was given to Engineer Salem Ramadan, and after welcoming the audience, he praised Professor Dr. Muhammad Masoud Gibran, who gave his life

In seeking knowledge, writing, authorship, teaching inside and outside Libya, and scientific research, this scholarly body presented dozens of books and scientific research in Libya’s cultural history, the Islamic West’s heritage, Andalusian literature, the Arabic language, and the art of translations, and presented to the Libyan library masterpieces of books. They will remain references for decades.

He considered this honorary symposium as an extension of the path of loyalty to our distinguished figures, to be proud of them and their great achievements, as do countries that respect their creators and appreciate their output.

During his speech, he announced the launch of the Sheikh Taher Al-Zawi Center for Research and Studies.

To be a center concerned with the Libyan issue in all its manifestations, preparing research and academic studies, holding seminars, conferences, workshops, forums, issuing periodicals, books, reports, and foreseeing the future, in the service of the Libyan society.

The speech of Prof. Dr. Abdul Hamid Abdullah Al-Harama – Dean of the College of Islamic Call and Vice-President of the Academy of the Arabic Language in Libya – came to shed light on Dr. Muhammad Gibran’s prose writing, in which he said that it is “an integrated art in which transmission, rhyme and dialogue are used, and he was given the choice in all of that.” Wonderful words and the art of masterpieces of the lexicon sometimes choose what they bring to life in a modern context mixed with the originality and attractiveness of expression.”

And the conclusion of the opening session was with the speech of the celebrated personality, Prof. Dr. Muhammad Masoud Gibran, where he expressed his thanks and appreciation to the Sheikh Taher Al-Zawi Foundation for this honorable gesture, and in his speech, he had mercy on the spirit of the scholar Sheikh Al-Taher Ahmed Al-Zawi, who learned from his exemplary path.

He also expressed, during his speech, the role of his parents and his wife in supporting and encouraging him, as well as generously commending friends and colleagues, the distinguished scholars, both for those who came from outside Libya and underwent the trouble of traveling, as well as from inside Libya, who were honored by their presence, testimony, recommendation, and scientific research, as well as mentioned by names. Colleagues at the Academy of the Arabic Language, he extended his deepest thanks and appreciation to them, and apologized to those who were unable to attend.

He summarized his scientific career from 1968 to 2018, when he began as a professor in Libyan schools and universities, and outside Libya in Senegal, Chad, Mali and Burkina Faso, and talked about his participation in serving the Libyan and Arab Islamic heritage, especially the heritage of the Islamic West. And about his articles in newspapers and newspapers, and publishing his research in Libyan and Arab periodicals, and about his books that enriched the Arabic library, and recently and in 2018, and based on the decision of the Presidential Council, he became president of the Arabic Language Academy.

Then the words were for the professors and doctors who participated in their testimony against Prof. Dr. Muhammad Masoud Gibran, and his role in introducing Libyan literature, and the creative approaches in his historical and literary works, and the efforts of the doctor in the art of translations, as well as posts to read the unpublished works of Professor Dr. Muhammad Masoud Gibran.

The scientific career of Professor Dr. Muhammad Masoud Gibran remains the tip of the iceberg for the life of this celebrated flag, which is counted among the flags of Libya and the countries of the Great Maghreb.