Women’s rights in Libyan legislation between reality and expectations 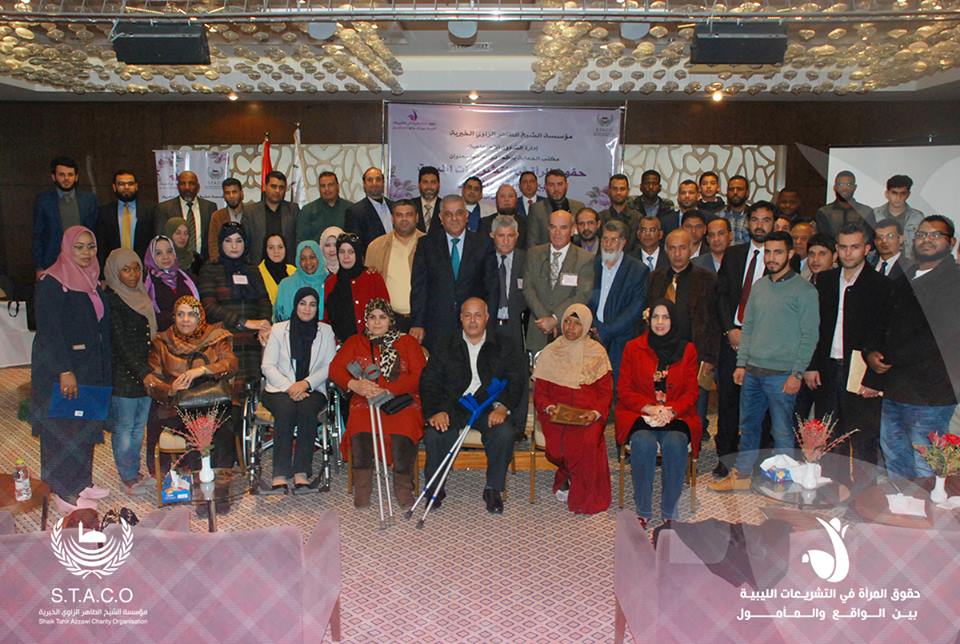 Tripoli, Libya
Today, the Department of Social Affairs at the Sheikh Al-Taher Al-Zawi Charitable Foundation organized a scientific symposium entitled “Women’s Rights in Libyan Legislation between Reality and Hope,” which was held at Bab Al Bahr Hotel in the capital, Tripoli.

The symposium opened with a speech from the Director of the Department of Social Affairs and Head of the Preparatory Committee, Ms. Amal Mohamed Hadiya, who praised the role of women and their continuous quest to achieve equality at all levels.

This was followed by the speech of the Chairman of the Board of Directors of the Sheikh Al-Taher Al-Zawi Charitable Foundation, Eng. Salem Abdel Salam Ramadan, in which he noted the importance of highlighting the role of Libyan women and their right to elections, political participation, and leadership positions.

Then, the Director of the Protection Office at the Department of Social Affairs and member of the Scientific Committee, Dr. Najia Ayyad Atrak, gave her speech, in which she stressed the importance of women’s participation in the political, professional and social fields and the demand for equality more appropriate for Libyan women.

After that, the Chairman of the Board of Directors of the Sheikh Al-Taher Al-Zawi Charitable Foundation presented his sincere thanks and appreciation to the symposium’s shield to the writer, writer and teacher (Lutfia Al-Qabaili) in honor of her literary history in support of women’s rights.

Eng. Salem Abdel Salam Ramadan was also honored by the Director of the Social Affairs Office with the symposium shield, in honor of his fruitful efforts and constructive cooperation with the Foundation’s Administrative Affairs Office team in various scientific and social fields.

From the beginning, the first session of the symposium was chaired by Dr. Ibrahim Al-Ferjani, during which research papers were presented. Each researcher submitted his participation and read his research in the general axis, the political axis, the international axis, and the legal axis, as well as ways to protect women in the event of a violation of their rights. Space for discussion.

As for the second session, it was chaired by Dr. Najia Atraq / Protection Office in the Department of Social Affairs, in which research was diversified for the purpose of developing leadership skills, international agreements and political rights for Libyan women.

In conclusion, there were recommendations and results presented by Professor Othman Hams, including the presentation of certificates of honor to the people who devoted their time and efforts to the success of this symposium, as well as a certificate of appreciation and thanks to the participants with research papers.

We hope that this symposium and the subsequent activities of the Foundation will contribute to raising women’s awareness of the importance of their role in society, overcoming the difficulties in front of them, and participating in bringing about a change in Libyan legislation and laws in a way that enhances the status of women in the development of society.

To watch Al-Nabaa channel coverage of the symposium, click here