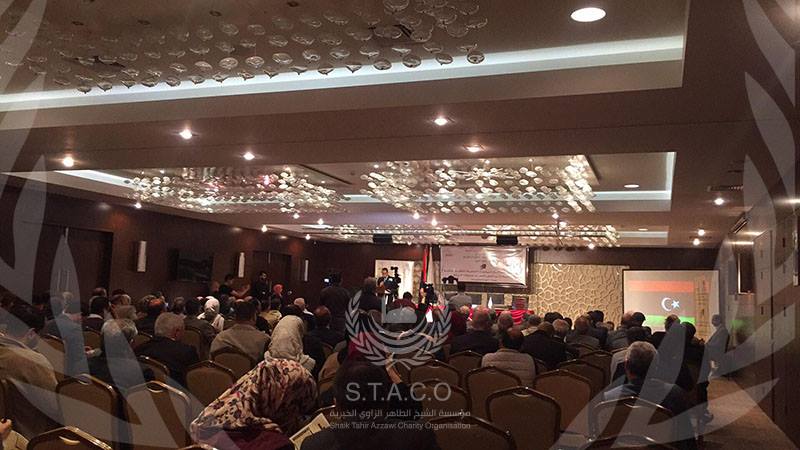 The activities of the scientific symposium, organized by the Department of Scientific Affairs at the Sheikh Al-Taher Al-Zawi Charitable Foundation, in cooperation with the Libyan Association for Libraries, Information and Archives, launched today, in the capital, Tripoli, under the title (Documents and Manuscripts in Libya: Protection, Organization, Access). In the presence of Mr. Youssef Abu Bakr, Minister of State for Displaced Affairs in the Government of National Accord, Ms. Asma Al-Usta, Minister of State for Women’s Affairs, Mr. Salem Ramadan, Chairman of the Board of Directors of the Sheikh Taher Al-Zawi Charitable Foundation, Dr. Mohamed Nasser bin Musa, President of the Libyan Association for Libraries, Information and Archives, and Dr. Mohamed Mohamed Al-Taher Al-Jarari, Director General of the Libyan Center for Archives and Historical Studies. In addition to those responsible for scientific and cultural institutions, researchers, faculty members, those working in the field of documents, manuscripts and archives, and those interested in scientific research and knowledge.

The symposium opened with a speech from the Chairman of the Preparatory Committee, Mr. Mahmoud Al-Ghatmi, in which he stressed the need to pay attention to documents and manuscripts that contain a lot of Libya’s scientific and cultural heritage, where thousands of manuscripts are buried in old corners and printed in the corridors of private libraries in various Libyan cities and towns, covered with dust and shrouded in oblivion. It is being eroded by neglect and negligence, in addition to being subjected to assault and theft, especially in recent years, which makes Libya lose a valuable part of its heritage, identity and memory. In collecting, classifying and indexing cultural heritage so that it is available to researchers and scholars.

During the speech of Dr. Muhammad Jarnaz, Chairman of the Scientific Committee, he highlighted the most important axes of the symposium, which is to stand on the reality of the institutions, research centers and universities that contain manuscripts and documents and study them in terms of organization, protection, coordination and digitization, as well as the focus of benefiting from the experiences of developed countries in the framework of digitizing manuscripts and documents.

Then the Chairman of the Board of Directors of STACO gave a speech, where he appealed to all research centers, universities, colleges and civil society institutions to pay special attention to collecting, preserving, restoring, indexing and making documents and manuscripts available to the beneficiaries because documents have become an element of the national culture of any nation and it is the treasury of its heritage and its universal memory. We must work to preserve and protect it.

Then, Dr. Muhammad bin Musa, President of the Libyan Association for Libraries, Information and Archives, stressed the tragic reality that manuscripts are subjected to from looting, smuggling and selling outside the country, in addition to the destructive care by preserving manuscripts in wet places unfit for preservation, and this difficult reality that manuscripts are exposed to. It requires us to take a serious stand to protect documents and manuscripts, and it requires intensified efforts and cooperation from everyone in spreading a culture of interest and care for this intellectual and cultural heritage.

The Minister of State for Displaced Affairs, Mr. Youssef Abu Bakr Jalala, hoped that the recommendations of the symposium would be a platform for action by the various state institutions and the preparation of plans through them. He also noted the importance of shedding light on the issue of the displaced, which has been exacerbated by armed conflicts.

In turn, a member of the Board of Directors of the Libyan Center for Archives and Historical Studies, Mr. Ali Al-Hajeen, recounted, during his speech, the manuscripts, tapes, correspondence documents and foreign documents of the Center.

During the opening ceremony of the scientific symposium, an exhibition of documents and manuscripts was inaugurated, on the occasion of the ninetieth anniversary of the House of Historical Manuscripts.

At the conclusion of the opening session, the Sheikh Al-Taher Al-Zawi Charitable Foundation honored the former presidents of the Historical Archives in appreciation of their outstanding contribution to the service of documents and manuscripts, and their preference over Libyan researchers, and in gratitude for their scientific efforts, on the occasion of the ninetieth anniversary of the foundation of the Historical Archives.

Professor Muhammad Al-Taher Al-Maqouz was also honored, who donated his library, which includes more than six thousand titles, and made it available to beneficiaries in the city of Al-Zawiya.

For more information, see the session schedule for the first day of the symposium: