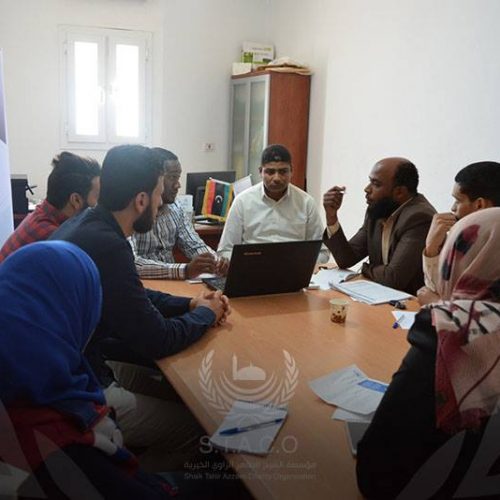 Sebha – Libya
A meeting was held in the office of Sheikh Al-Taher Al-Zawi Charitable Foundation in the south, which included the director of the office, the relief affairs officer, the project manager, the logistics official, the information documentation officer, and the office’s advisor.

In order to discuss the progress of the work of distributing food aid within the World Food Program project to displaced families in the southern region.

During the meeting, the importance of modernizing the target and beneficiaries system and the mechanism of work of distribution committees in conflict areas and families who cannot reach the distribution places designated in the area were also discussed.

At the end of the meeting, an explanation was given to the delegates in charge of the project, how to fill out forms for receiving aid, questionnaires for beneficiaries, and follow-up on the displacement movement.