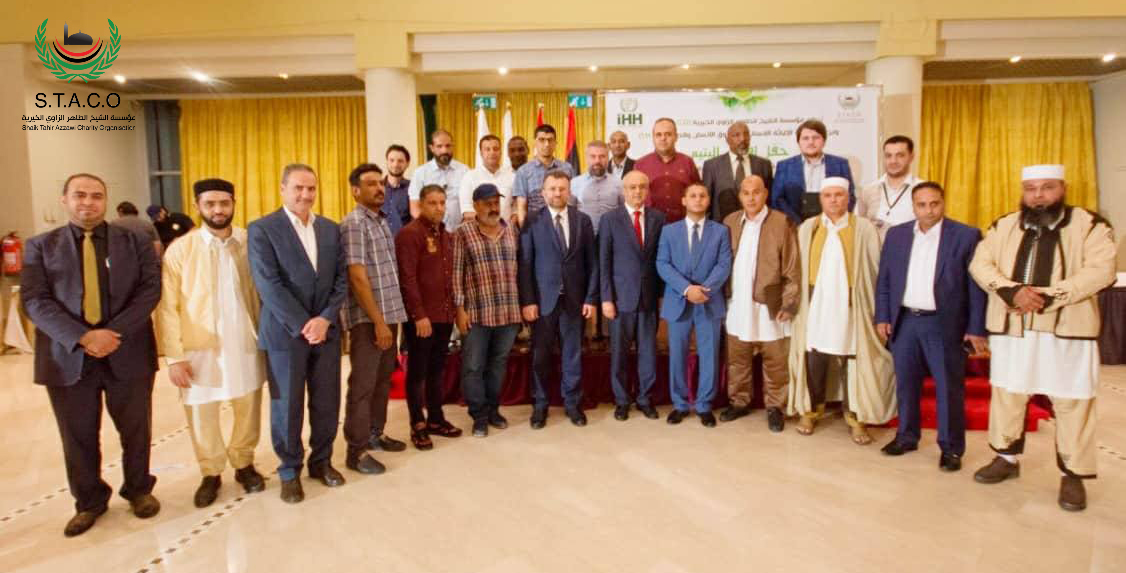 In conjunction with the Orphan’s Day, which was approved by the Organization of Islamic Cooperation on the 15th of Ramadan each year, the Sheikh Taher Al-Zawi Charitable Foundation STACO, in cooperation with the Turkish Humanitarian Relief Organization IHH, organized a special iftar that included children of orphanages in Tripoli, Misurata and Al-Zawiya at Corinthia Hotel in the capital, Tripoli. A protocol was signed with IHH to launch the orphan sponsorship project.

The Chairman of the Board of Directors of the STACO Foundation, Engineer Salem Al-Qamoudi, said in a speech during this occasion that “the Foundation’s interest in orphans comes in response to the difficult conditions that the country has witnessed, from a war that lasted for years, in which widespread violations were recorded, such as killing, looting, robbery, and the displacement of thousands of residents, As a result, extremely bad humanitarian conditions have resulted, with an increase in the number of orphans, widows, amputees and other victims; This prompted us to intervene in an attempt to take the hand of orphans in our country and provide them with a decent life, and caring for orphans is a priority of our national security.”

Engineer Salem Al-Qamoudi also stated during a brief interview with Libya Al-Watan TV that the partnership between the Staco Foundation and IHH comes to alleviate the suffering of the orphan in Libya. The true Islamic scholar, and preached the reward for his sponsor, and also wished the legislative and executive authority to give the orphan adequate attention and care, and Engineer Salem added that the plan aims to launch a project related to sponsoring orphans, and the Foundation hopes that this project will contribute to the establishment of projects with a developmental dimension that help improve Orphans’ livelihood and getting them out of sponsorship to sufficiency.

In a speech delivered by the President of the Humanitarian Relief Organization, Mr. Azza Shaheen, he said:

“We as a humanitarian relief organization consider orphans sacred trusts for the nation, and this is how we look at them and this is how we are honored to serve them.” He noted that today there are more than 400 million orphans, a third of them from the Islamic world, of whom 150 million are in the streets, as Azza Shaheen added, “We must extend a helping hand. for orphans; In order not to be exploited by armed gangs and factions, and to raise awareness of the social responsibility towards this segment of society.”

The Ambassador of the Republic of Turkey to Libya, Mr. Ahmed Doğan, expressed his deep regret that officials do not provide sufficient support to the needy. He also stressed the need for cooperation between the State of Libya and Turkey to provide assistance to people in need, and stated that the cooperation between STACO Foundation and IHH is a good example of that.

The representative of the President of the General Authority of the Social Solidarity Fund, Mr. Fawzi Moussa, said during his speech:

“Orphans are one of the segments that benefit from the services of the Social Solidarity Fund along with persons with disabilities, the elderly, needy families, those whose livelihoods have narrowed, and the victims of natural disasters who were entrusted with the care of the Social Solidarity Fund by the provisions of Law No. 20 of 1990 AD as amended by Law No. 10 of 2000 AD However, due to its importance, this sector always needs care, follow-up, and standing up to the difficulties it faces from time to time with support and advice; In order for those under it to enjoy security and life.”

The representative of His Excellency the Minister of Interior, Mr. Fouad Al-Basha, expressed that the Ministry of Interior’s keenness to participate in this occasion stems from its full conviction that social security constitutes an important pillar of security. It relies on it for construction and development.

Minister of State for Displaced and Migrant Affairs Dr. Youssef Al-Jalala stated that, through the efforts made by the state, aimed at solving the issue of the displaced and forcibly displaced, it hopes that the next Ramadan will not come except for all the displaced and displaced people in their homes and among their families and relatives, practicing their normal lives freely, and contributing to stability. Security, safety and comprehensive development in all aspects of life on the basis of fraternity, tolerance and social justice under the state of institutions and the law.

A representative of a member of the Presidential Council praised the efforts made by the Foundation, and its effective role in cooperation and partnership in order to deliver aid, extend a helping hand to everyone in need, and contribute to alleviating their suffering.

The day was concluded by honoring the Minister of State for Displaced and Migrant Affairs, Dr. Youssef Al-Jalala, the Turkish Ambassador to Libya, Ahmed Dogan, and the President of the Sheikh Taher Al-Zawi Charitable Foundation, Engineer Salem Al-Qamoudi, for their support and interest in caring for orphans in Libya. In addition to honoring the active personalities of the General Authority of the Social Solidarity Fund.