A press conference entitled “Libya in light of the social, health and migration crises” 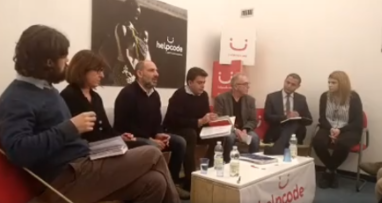 Genoa – Italy
The Chairman of the Board of Directors of the Sheikh Al-Taher Al-Zawi Charitable Foundation (STACO) Mr. Salem Al-Qamoudi participated in the discussions of the press conference organized by the Italian Helpcod Organization in the framework of cooperation and great partnership between the two organizations. This meeting came to discuss social and health emergencies and the migration crisis that the country is experiencing after the fall of the Libyan regime Which led to deep political instability, and the country became an important place of transit for thousands of migrants who headed to European coasts, especially Italian coasts, where EU data speak of more than 200,000 internally displaced people and a total of more than one million people in need. A large part of the population is also suffering the consequences of this situation, and there are severe restrictions on access to food, drinking water, energy, medical supplies and primary public services.

The Chairman of the Board of Directors of Staco began his speech by expressing his happiness to participate in this event and the great partnership that links the Staco Foundation with the Italian Helpcode Organization and the hard work to alleviate the pain of the affected and irregular migrants because Libya is a transit country for irregular migration.
Working in Libya is very difficult due to the poor security situation, the widespread arms proliferation, the conflicting interests of regional states, the political division and the inability to reach national reconciliation and form a government. Structural.
The STACO Foundation is considered the largest partner of the United Nations in Libya, as it works on projects in partnership with UNICEF, the World Food Program, IOM, and other international humanitarian and non-profit organizations. STACO is now working on a huge project with international organizations to monitor the movement of irregular migrants from Libyan south and before their arrival to the Libyan coast.